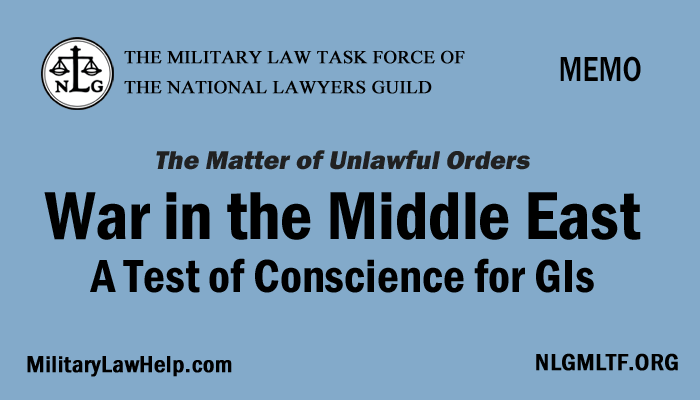 In November of 2018, MLTF published Deployed to the Border, a memo providing guidance to servicemembers being ordered to participate in President’s Trumps illegal anti-immigration activities along the US border with Mexico. That document, written by MLTF member James M. Branum, continues to be relevant to military members who find themselves unwillingly involved with a policy they do not support.

Now we have adapted that memo to address another instance of Trump administration malfeasance of and misuse of the US military in policy that violates international law as well as possibly violating US legislation and treaties. The new memo, which becomes the second in our Unlawful Orders series of memos (which we hope will not need expanding) was written by Branum, Jeff Lake and Kathy Gilberd, all members of MLTF’s Steering Committee and long-time GI Rights advocates. Branum and Lake are attorneys and Gilberd is a legal worker with decades of experience in counseling and writing about GI Rights.

Facing War in the Middle East: A Test of Conscience for GIs provides critical legal information for US servicemembers concerned about the legality and morality of deployment to and orders about the Middle East and war against Iran.

The memo is free of charge. Donations are appreciated and will help MLTF continue to produce timely publications for servicemembers, vets and their advocacy community.