The Military Law Task Force was formed in the 1970s in Washington, D.C. when Jim Klimaski, Mike Gaffney, and Keith Snyder first began publishing ON WATCH. In 1978, Kathy Gilberd became chair and the office was moved to San Diego, California.

The core of the Military Law Task Force has been people who were draft counselors/lawyers during the Vietnam War. We taught draft counseling classes in the 60s and set up the original anti-draft organizations at colleges and universities. As the war continued, we then moved on to military counseling and law.

The history of the Guild’s anti-war and draft counseling work can be traced back to 1967, when folks, including Freddy Gardner and Joseph Tieger, created the first GI Coffee Houses. Also at this time, Support Our Soldiers (SOS) and the US Servicemen’s Fund (USSF) began. The Guild began its military law counseling in 1968, and published the “Military Counseling Manual” in 1969. The Winter Soldier Investigation and the FTA shows with Jane Fonda also spurred the movement forward. 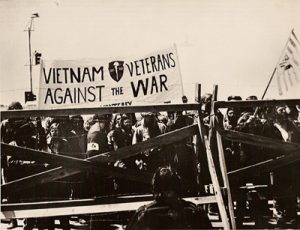 During the Vietnam War many military projects were organized close to military bases throughout the United States and in Japan, Okinawa, Vietnam, Germany, and the Philippines. The Military Law Project began at Fort Ord in Monterey, CA, in 1970.

NLG members were involved in GI projects at Fort Lewis in Washington, Fort Hood in Texas, Fort Benning, Fort Bragg, Camp Lejune, Fort Dix, Up Against the Bulkhead (Navy), and Camp Pendleton in California, to name a few.

The NLG Military Law Project in Okinawa discovered that nuclear weapons were being housed there, contrary to Japanese law, resulting in the fall of the sitting government. In the Philippines, the NLG’s staff attorney was arrested by that government.

Those of us involved during the Vietnam War, in the resulting draft resistance, in Vietnam Veterans Against the War and other Veterans’ rights organizations, Don’t Ask Don’t Tell struggles, the “small wars” (Grenada, Kosovo, etc.), the “larger wars,” and the Gulf War, all formed the MLTF to keep in contact and continue our work. Others have joined with us as time moved on and have provided political and legal direction to our work.

The newsletter was first published in July, 1977, carrying articles on military law and commentary on military policy. It continued as a monthly, bi-monthly and occasionally annual publication through November, 1996, when it went into a hiatus until the beginning of the war in Iraq.

We published three issues in 2003 and 2004 before another pause, and then resumed production in 2007. The subsequent publishing schedule has been sometimes erratic (as with most volunteer organizations), multiple issues have been published each year since, except for 2015 when only one issue was produced.

View our online archive. In 2017, we did a 40-year retrospective of On Watch.