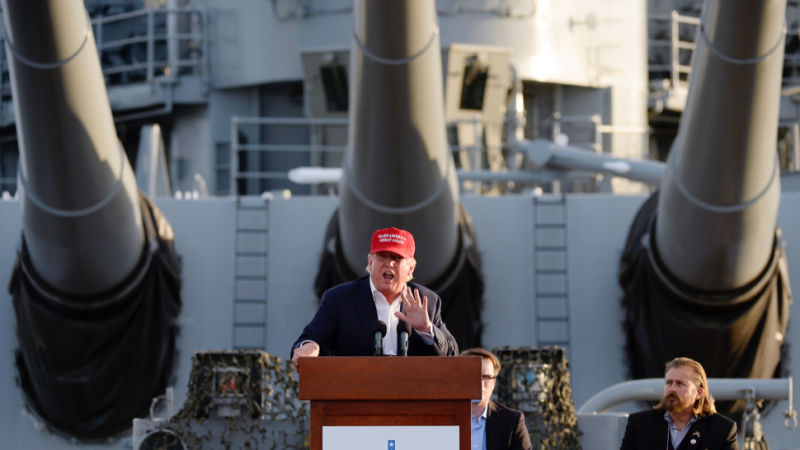 President Trump has been and remains so unpredictable in his words and actions that there is much we still don’t know about what his administration holds for the men and women who wear the uniforms of the United States Armed Forces. Because he is so often inconsistent in what he says and does, it is also difficult to determine what, if any, principles are guiding his actions. As such, it is important that we who are concerned about ensuring justice for members of the military, especially as an avenue through which to pursue a more peaceful, just and sustainable future for all, keep a close watch on the actions of this administration and begin to develop ideas and strategies to respond to the challenges that may lie ahead.

Immediately after the election, many analysts and activists expressed concern about a rollback on the progress that had been made over the last several years with respect to the freedom of LGBTQ members to continue to serve openly, the well-being of LGBTQ troops and their families, and the rights of women to choose to serve in any position for which they were qualified. During his campaign, Donald Trump said he would be an ally to LGBTQ communities, but he also frequently played to his base with disdainful talk about President Obama and his “politically correct” military. His campaign surrogates also ridiculed what they called Obama’s and then-Secretary of Defense Ashton Carter’s “social engineering” of the military. Then, last fall, Trump appointed Retired Marine General James Mattis as his Secretary of Defense, who has been on the record questioning the wisdom of women serving in combat and LGBTQ troops serving openly. Still, at his confirmation hearing, Mattis asserted that he had no plans to actively work to undo the gains of the Obama-era.[1]

For now, it appears that these are settled policies, yet in light of the recent nude photo-sharing scandals[2] and the continuing failure of the branches to adequately address or prevent sexual assault, the ongoing well-being of LGBTQ troops and female service members should continue to be on our radar.

One very disturbing event that impacts military families is the Trump administration’s removal of the guidance that the Obama administration laid out for schools to protect the rights of transgender students. Trump’s Justice and Education Departments have decided to remove federal guidelines that protect, for example, a student’s right to use the bathroom that matches their gender identity, in favor of allowing states to develop their own guidelines. Military families, otherwise protected by DOD policy, would be subjected to state policies in areas where they are stationed. Active duty military parents have no control over where they live or when they move, so it is quite possible, and likely, that a transgender student with a military parent could change schools and be subjected to a starkly different policy– one that could have potentially devastating and damaging effects on the child. We know as GI Rights counselors, that the well-being of the family is rarely a concern to commands, but for military parents, a threat to the well-being of a transgender child could surface as a concern about the future of their military service obligation.

Another matter that has been confirmed is that President Trump has an affinity for military generals and is a firm believer in “Peace through Strength.” He has declared his support for public displays of military strength, like parading tanks down Pennsylvania Avenue.[3]

But more alarmingly, he has given the Pentagon and the Intelligence community more power and authority to launch raids and drone strikes without his approval, and removed the Obama Administration policy that a strike take place only if there is “near certainty” that no civilians would be killed.[4] Trump’s recently revealed budget proposal would cut the State Department by 28%, while increasing military spending by 10%, or $52 billion.[5] Trump plans to double the number of ground troops in Syria[6] and has signaled he will continue and increase US support for the Saudi war against the Houthis in Yemen as part of his administration’s strategy toward Iran.[7] Trump also has called for an increase in the size of the military, with the Army aiming to add 6000 new soldiers by September.[8]

This is a clear move toward even greater militarization of the US’ already over-militarized approach to foreign policy. The question for us is will this decreased focus on diplomacy mean more war, more deployments, more boots on the ground and more US drone pilots asked to strike high-civilian targets? All of which adds up to, at best – more traumatized troops facing already overburdened healthcare providers within DOD, and at worst – more troops being forcibly kicked out of the military. These involuntary discharges are often the result of some infraction triggered by their medical condition. And being kicked out means being denied proper care from the DOD and can mean being stripped of the right to access care as veterans once they are discharged. The problems of redeploying traumatized troops[9] likely are well-known to this audience, as well as the unique trauma suffered by drone pilots.[10] And just so it is crystal clear that support for the troops is not a high priority for this administration, their proposed budget intends to cover military spending increases with cuts to DOD heath care, according to a tweet by Mackenzie Eaglen, an analyst with the American Enterprise Institute. Additionally, with the aggressive recruiting that’s going to be required to increase troop numbers that quickly, it is a safe bet that recruiter abuse – already rampant and, in many cases, cruel and inhumane (Indiana National Guard, I’m looking in your direction) – will be on the rise.

Legendary journalist, and all around good guy, Bill Moyers puts it this way: “Policy-by-general is sure to create a skewed view of policy-making, since everything is likely to be viewed initially through a military lens by men trained in war, not diplomacy or peace.” [11] This kind of thinking may be contributing to the administration’s posture toward North Korea. US troops stationed near North Korea already endure a hostile and traumatizing environment, with regular war games and looming threats of hostility. The stress and trauma of this environment could increase, if the already intense posturing on both sides continues.

In contrast to an example of the better judgment of his generals, though, Trump has a pet project he just doesn’t seem to want to let go: bringing back torture and the infamous CIA “black sites,” and once again filling up the US prison at Guantanamo Bay, Cuba.[12] For now, it appears that Secretary Mattis has been able to overrule Trump on torture, but the executive order is written and standing by. Torture does not work. It fuels acts of terrorism. It puts US service members, citizens, residents, and nationals abroad at risk. It is also unlawful, but when was the last time a high-ranking or high-profile official was held accountable? More likely, in the event anyone is brought to account, she will resemble 21-year old Army Private Lynndie England, whose young life was thrown into chaos for her participation in abuse of prisoners at Abu Ghraib prison in Iraq.[13]

Another reportedly drafted proposal would mobilize 100,000 National Guard troops to assist with immigration and border enforcement.[14] The administration has denied that this proposal is under any kind of serious consideration, but they also have been quite clear that immigration enforcement is an integral piece of their national security policy. In the event that National Guard soldiers were called up for such a mobilization, resources to support the troops who resist or refuse would be in high demand.

MOST VULNERABLE STAND TO LOSE THE MOST

This brief summary is chock full of alarming activity and proposals for such a brief tenure and an administration that is still largely unstaffed. Trump has had great difficulty filling the top posts at the Pentagon. His Navy and Army secretaries stepped down due to ethics conflicts. Now his Air Force Secretary nominee, former New Mexico Congresswoman Heather Wilson, is under scrutiny as well for her close ties as a lobbyist for the nuclear weapons industry. Deputy National Security adviser Keith Kellogg is a retired general who worked for defense contractors who fueled and profited from the occupation of Iraq under the George W. Bush administration.[15] Trump’s go-tos for appointments are consistently millionaires or billionaires who stand to profit either directly or indirectly from US government business, and no US business is more profitable than war.

With personal interest at stake, the risk of corruption is high, and in the inevitable scandals and cover-ups that already have begun, it will always be the most vulnerable who stand to lose the most. In the US military, the most vulnerable will always be the lowest ranking enlisted members, who overwhelming are barely out of their teen years, and members of already marginalized populations, including women, people of color, and LGBTQ people.

Finally, the fact that Trump, a notorious bully,[16] is the Commander in Chief, is reason enough for us to be concerned about the erosion of justice for members of the military. The military exists to perpetrate injustice: the military exists to fight and win wars. By design, it must program its members with, and constantly reinforce, inhumanity so that they will be capable of taking another human life by rote, without thinking and on command. Inevitably, that inhumanity will be and is frequently directed at the internal population. The case of Raheel Siddiqui, a young Muslim Marine who died under suspicious circumstances at boot camp, is a more horrifying example of thousands of cases of abuse and cruelty toward members of the military at the hands of their own.[17] And Raheel’s case took place under the best of circumstances, with an administration that never demonized Islam, and made significant strides toward equality within the DOD.

We already know from our experience with callers to the GI Rights Hotline that people of color, women, and non-Christians – all populations Trump has disparaged in a variety of ways – meet hostility on a regular basis in the course of their service. One young woman, the only African American in her shop at Little Rock Air Force Base, reports coming to work the day after the election, to find “Trump” written on her workstation. At the Center on Conscience & War, conscientious objectors we are working with have reported feeling even more marginalized, as troops feel emboldened to posture aggressively toward them, imitating, like children, what they see modeled for them on the news or their Twitter feed.

Resistance to the many dangerous and unjust policies of the Trump administration is already in progress on many fronts. We in the GI Rights community are called on, too, to bolster not only our resolve so that we can remain vigilant for the long haul, but also our compassion, our patience and our love. With those in force, we won’t fail.

Maria Santelli is Executive Director of the Center on Conscience & War in Washington, DC, and a counselor with the GI Rights Hotline.