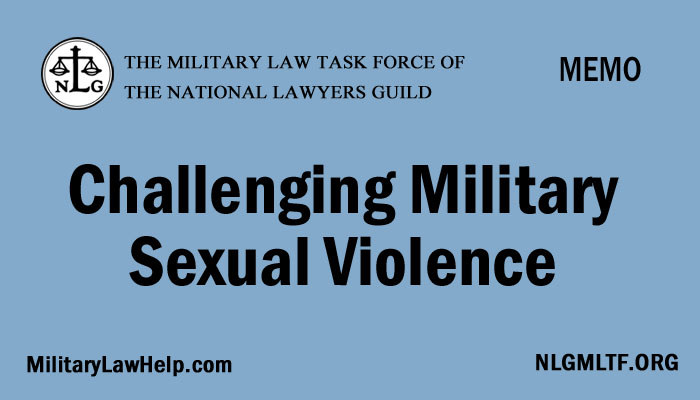 MLTF’s memo “Challenging Military Sexual Violence: A Guide to Sexual Assault and Sexual Harassment Policies in the U.S. Armed Forces for Servicemembers, MSV Survivors and Their Advocates” has been updated and republished.

The Challenging Military Sexual Violence project was supported by a grant from the National Lawyers Guild Foundation, and the members of the ad hoc committee to produce the material were Kathleen Gilberd, Kathy Johnson, Rena Guay, Brad Thomason and Aaron Frishberg.

SAN DIEGO—In response to the ongoing crisis of sexual assault and harassment in the US military, the Military Law Task Force (MLTF) of the National Lawyers Guild (NLG) has published a practical guide for service members entitled, Challenging Military Sexual Violence: A Guide to Sexual Assault and Sexual Harassment Policies in the U S Armed Forces for Servicemembers, MSV Survivors and Their Advocates. With military sexual violence (MSV) still at epidemic levels despite years of Pentagon and Congressional attention, advocates and the MLTF are ramping up their efforts to help servicemembers fight back against the military’s entrenched tradition of sexual violence.

The MLTF’s Challenging Military Sexual Violence is a detailed guide on the current policies designed to stop military sexual violence (MSV). Authored by MLTF Executive Director Kathleen Gilberd who has conducted MSV workshops for attorneys and counselors nationwide since the 1990s, the guide explains the complex regulations that each branch has developed (and continues to update). It covers both sexual assault reporting and sexual harassment complaints, with additional sections on responding to retaliation for making complaints. The guide is accompanied by an introductory brochure providing an overview of the policies.

“Challenging Military Sexual Violence offers no easy or sure solutions—just an honest appraisal of the choices one faces, the possibilities of redress and the pitfalls that may be encountered,” Gilberd stated.

“In recent years, the U.S. military has been tarnished by the public revelation of its history of unpunished sexual abuse within the ranks,” said David Gespass, MLTF board member. “Stories abound of victims who lost their careers when they reported being raped and of their unpunished rapists. Military brass have claimed that they are addressing the problem and have resisted any change to their internal procedures aimed at reducing the prevalence of assault and impunity.”

“Some new protections have been put in place and some remedies are now available, but the system is littered with land mines for victims seeking redress. Our guide was developed to help service members navigate those land mines,” added Gespass.

Challenging Military Sexual Violence was produced with the aid of a grant from the NLG Foundation. The guide and brochure are available for free on the organization’s website at nlgmltf.org. Print copies are available for order upon request (a donation is suggested by not required).