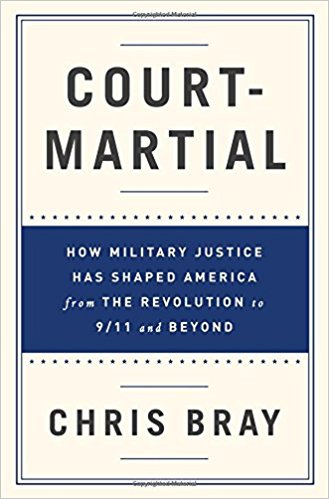 Court-Martial: How Military Justice Has Shaped America from the Revolution to 9/11 and Beyond

by Mr. Chris Bray, US Army Infantry Sergeant & PhD in History from UCLA.

The United States came into existence at a time when the laws of war and governance of the armies which fought them were beginning to take hold and develop. The new nation had only a limited history of warfare: formations of citizen militias to fight off attacks from Native American tribes trying to resist further expansion of the European colonists.

These militia formations consisted of friends and neighbors: volunteers and pressured townspeople or farmers, who had a personal stake in whatever fight they were engaged in. Officers were elected. These citizens taught themselves how to fight and behave as soldiers. It was not uncommon for debates to occur as to the best ways to fight. Once the danger was over, these militias would become dormant or even disband.

To keep up a presence, some would become clubs or social organizations. It was from this core that an American revolutionary army would emerge. And this is the starting point for Chris Bray’s Court-Martial and its chronicle of the evolution of American military law and American military justice. The book is not just for those interested in the history of law. Bray presents a picture of military law attempting to protect the status quo as the world changes.

Early victories in Massachusetts and the Carolinas at the beginning of the fight with England would soon be followed by one disaster after another as the militias rebelled against the discipline imposed upon them and the extended need for their services. The fledgling country imported European officers to train these citizen volunteers and mold a true fighting force. Debating was being replaced by strict discipline. This discipline required laws. But the tension between the individual soldiers’ sense of right and fairness would quickly come into conflict with the new armies’ need for discipline and order.

In Court-Martial, Bray provides a socio-political history of the development of military law and military justice from its inception during the War of 1812 until the present day. Mr. Bray speaks with authority from his research as a historian and his personal experience as a former Army sergeant. His book is not a dry recitation of the change in the written laws, but rather it documents the impact of political and social events on the formation of military justice as the country grew and aged.

The early militias raised the question of the extent of military law jurisdiction. When were you a soldier, and when were you a free citizen? Throughout the 19th century and the advance of the manifest destiny ideology – the colonizing of the land mass between the Atlantic and Pacific Oceans – this tension would remain.

Further tension arose in the question of military governance over civilians caught up in war-like incidents involving Native Americans and other distinct groups attempting to assert their dominion over tracts of land during the Westward expansion to the Pacific and beyond. Bray provides examples of Generals Andrew Jackson, Winfield Scott, and Henry Sibley creating military commissions of dubious legality to try Native Americans and recalcitrant civilians standing in the way of the Army or initiating uprisings to protect their lands from further encroachment by westward moving immigrants. These civilian-military conflicts would rise again and again, up to the present-day Guantanamo cases.

As Bray points out, these military commissions resulted in expediency trumping law and justice – although the Guantanamo cases have found the opposite to be true as law triumphed in the battle over ascendancy between the civilian government and the military – both sides having “traitors” in their midst.

The book covers the effect of changing social values and political considerations. The US Civil War brought Blacks – both free men and former slaves – into the military officially for the first time. It took over a hundred years to complete the integration, with the military sometimes leading, and sometimes following, the civilian community. One setback resulted in the summary hanging of 19 Black soldiers near Houston, Texas before higher authorities could even review the trial.

The integration of women in the military is now unfolding at an accelerated pace. So too gays, lesbians, transgender, and other ethnic and social minorities are now being officially accepted into the armed services.

To deal with the military, you need to understand the military. Mr. Bray’s Court-Martial opens the door to the military’s soul and it isn’t very pretty, but well worth the read.

Jim Klimaski was a co-founder of the MLTF and is the principal in the law firm Klimaski and Associates, P.C. located in Washington, DC. He practices in the fields of Military Law, Employment Law, Security Clearances and Freedom of Information and Privacy Law.