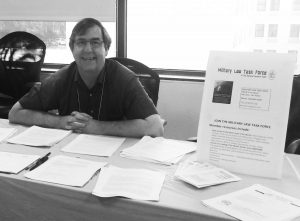 The Convention was highlighted by awards given to Oscar Lopez Rivera (Arthur Kinoy Award) and the Water Protector Legal Collective (Law for the People Award). Both awardees inspired Guild members to continue the struggle for justice here in the U.S. and around the world. The MLTF sent its greetings as follows:

“The Military Law Task Force rejoices at the release of Chelsea Manning. But our joy is tempered by the knowledge she spent seven years in brutal confinement for exposing the ugly face of US imperialism. It is tempered further by all those political prisoners still languishing in our prisons and jails.”

The MLTF did not sponsor a workshop or major panel at this convention. However, as usual, the MLTF literature table was staffed and featured a variety of MLTF publications and information. Many thanks to MLTF Treasurer Libby Frank for being a stalwart at the table.

Finally, the Convention featured an impromptu demonstration at the Department of Justice building. Attorney General Sessions had been set to give an outdoor press conference at the time of the demonstration, but the conference was moved inside for unexplained reasons! MLTF members joined the rest of the Guild in this spirited event and hopefully this energy will sustain us in the year ahead.