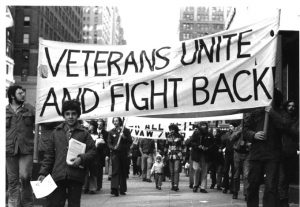 For many years after the Vietnam War, we enjoyed the “Vietnam syndrome,” in which US presidents hesitated to launch substantial military attacks on other countries. They feared intense opposition akin to the powerful movement that helped bring an end to the war in Vietnam. But in 1991, at the end of the Gulf War, George H.W. Bush declared, “By God, we’ve kicked the Vietnam syndrome once and for all!”

With George W. Bush’s wars on Iraq and Afghanistan, and Barack Obama’s drone wars in seven Muslim-majority countries and his escalating wars in Iraq and Syria, we have apparently moved beyond the Vietnam syndrome. By planting disinformation in the public realm, the government has built support for its recent wars, as it did with Vietnam.

Now the Pentagon is planning to commemorate the 50th anniversary of the Vietnam War by launching a $30 million program to rewrite and sanitize its history. Replete with a fancy interactive website, the effort is aimed at teaching schoolchildren a revisionist history of the war. The program is focused on honoring our service members who fought in Vietnam. But conspicuously absent from the website is a description of the antiwar movement, at the heart of which was the GI movement.

Thousands of GIs participated in the antiwar movement. Many felt betrayed by their government. They established coffee houses and underground newspapers where they shared information about resistance. During the course of the war, more than 500,000 soldiers deserted. The strength of the rebellion of ground troops caused the military to shift to an air war. Ultimately, the war claimed the lives of 58,000 Americans. Untold numbers were wounded and returned with post-traumatic stress disorder. In an astounding statistic, more Vietnam veterans have committed suicide than were killed in the war.

Millions of Americans, many of us students on college campuses, marched, demonstrated, spoke out, sang and protested against the war. Thousands were arrested and some, at Kent State and Jackson State, were killed. The military draft and images of dead Vietnamese galvanized the movement. On November 15, 1969, in what was the largest protest demonstration in Washington, DC, at that time, 250,000 people marched on the nation’s capital, demanding an end to the war. Yet the Pentagon’s website merely refers to it as a “massive protest.”

But Americans weren’t the only ones dying. Between 2 and 3 million Indochinese – in Vietnam, Laos and Cambodia – were killed. War crimes – such as the My Lai massacre – were common. In 1968, US soldiers slaughtered 500 unarmed old men, women and children in the Vietnamese village of My Lai. Yet the Pentagon website refers only to the “My Lai Incident,” despite the fact that it is customarily referred to as a massacre.

One of the most shameful legacies of the Vietnam War is the US military’s use of the deadly defoliant Agent Orange, dioxin. The military sprayed it unsparingly over much of Vietnam’s land. An estimated 3 million Vietnamese still suffer the effects of those deadly chemical defoliants. Tens of thousands of US soldiers were also affected. It has caused birth defects in hundreds of thousands of children, both in Vietnam and the United States. It is currently affecting the second and third generations of people directly exposed to Agent Orange decades ago. Certain cancers, diabetes, and spina bifida and other serious birth defects can be traced to Agent Orange exposure. In addition, the chemicals destroyed much of the natural environment of Vietnam; the soil in many “hot spots” near former US army bases remains contaminated.

In the Paris Peace Accords signed in 1973, the Nixon administration pledged to contribute $3 billion toward healing the wounds of war and the post-war reconstruction of Vietnam. That promise remains unfulfilled.

Despite the continuing damage and injury wrought by Agent Orange, the Pentagon website makes scant mention of “Operation Ranch Hand.” It says that from 1961 to 1971, the US sprayed 18 million gallons of chemicals over 20 percent of South Vietnam’s jungles and 36 percent of its mangrove forests. But the website does not cite the devastating effects of that spraying.

The incomplete history contained on the Pentagon website stirred more than 500 veterans of the US peace movement during the Vietnam era to sign a petition to Lt. Gen. Claude M. “Mick” Kicklighter. It asks that the official program “include viewpoints, speakers and educational materials that represent a full and fair reflection of the issues which divided our country during the war in Vietnam, Laos and Cambodia.” The petition cites the “many thousands of veterans” who opposed the war, the “draft refusals of many thousands of young Americans,” the “millions who exercised their rights as American citizens by marching, praying, organizing moratoriums, writing letters to Congress,” and “those who were tried by our government for civil disobedience or who died in protests.” And, the petition says, “very importantly, we cannot forget the millions of victims of the war, both military and civilian, who died in Vietnam, Laos and Cambodia, nor those who perished or were hurt in its aftermath by land mines, unexploded ordnance, Agent Orange and refugee flight.”

Antiwar activists who signed the petition include Tom Hayden and Pentagon Papers whistleblower Daniel Ellsberg. “All of us remember that the Pentagon got us into this war in Vietnam with its version of the truth,” Hayden said in an interview with The New York Times. “If you conduct a war, you shouldn’t be in charge of narrating it,” he added.

Veterans for Peace (VFP) is organizing an alternative commemoration of the Vietnam War. “One of the biggest concerns for us,” VFP executive director Michael McPhearson told the Times, “is that if a full narrative is not remembered, the government will use the narrative it creates to continue to conduct wars around the world – as a propaganda tool.”

Indeed, just as Lyndon B. Johnson used the manufactured Tonkin Gulf incident as a pretext to escalate the Vietnam War, George W. Bush relied on mythical weapons of mass destruction to justify his war on Iraq, and the “war on terror” to justify his invasion of Afghanistan. And Obama justifies his drone wars by citing national security considerations, even though he creates more enemies of the United States as he kills thousands of civilians. ISIS and Khorasan (which no one in Syria heard of until about three weeks ago) are the new enemies Obama is using to justify his wars in Iraq and Syria, although he admits they pose no imminent threat to the United States. The Vietnam syndrome has been replaced by the “Permanent War.”

It is no cliché that those who ignore history are bound to repeat it. Unless we are provided an honest accounting of the disgraceful history of the US war on Vietnam, we will be ill equipped to protest the current and future wars conducted in our name.