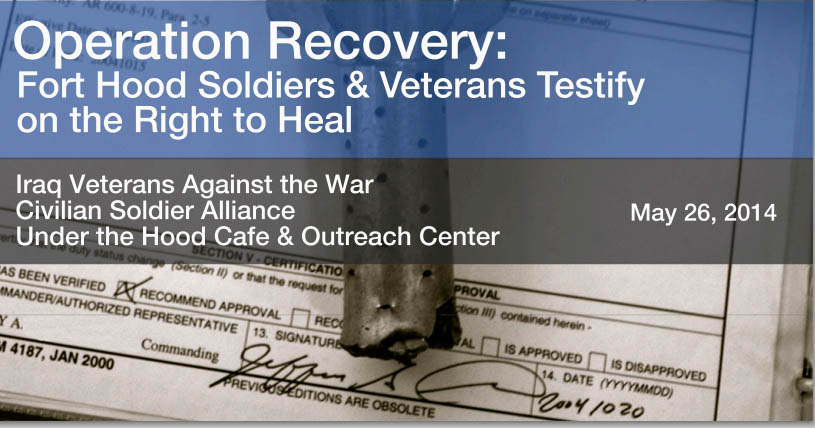 This Memorial Day a national group of Iraq and Afghanistan veterans marked the solemn holiday by exposing a series of unethical healthcare practices at the largest Army post in the country, Fort Hood, that puts soldiers’ lives at risk and compounds the pressure on an overwhelmed VA. Practices such as commanders, with no medical training, deploying soldiers against a doctor’s orders are one of the many shocking discoveries that is revealed in the groundbreaking report ‘Operation Recovery: Fort Hood Soldiers and Veterans Testify on the Right to Heal‘ (also referred to as the Fort Hood Testimony Report).

The report is the product of months of investigation and compilation by its authors: Iraq Veterans Against the War (IVAW), Under The Hood Café and Resource Center, and Civilian Soldier Alliance. The Military Law Task Force contributed legal support, analysis of regulations, and assistance in developing recommendations. One of the individual authors noted that the Task Force’s participation was critical to the strength of the report.

The Fort Hood Testimony Report is the result of three years of sustained outreach in the Fort Hood community, and contains 31 in-depth testimonials from Fort Hood veterans and soldiers. Additionally it has a series of findings and recommendations for the Army and Congress. This report provides a snapshot in time of a military base at the height of the deployment cycle all the way to the recent drawdown and a window into the challenges that service members face in a military that has been at war for more than a decade.

Expressing amazement at the negligent deployment practices soldiers experienced, Fort Hood Army veteran and a testifier in the report Chas Jacquier says “Prior to going, our unit was so low in numbers that we actually took soldiers into Afghanistan who were on crutches. We’re walking fifteen, twenty cliffs a day at 10,000 feet elevation through the mountains. The guy just got off crutches and you expect him to be able to do that?”

Just a few of the findings include:

This comprehensive report sheds light on the legacy of two wars characterized by multiple deployments, overmedication, a military culture that highly stigmatizes mental health care and could go far in explaining why the VA is deeply overwhelmed in processing claims and why the veteran community has such a dramatically high suicide rate.

Iraq Veterans Against the War (IVAW) is a nonprofit 501(c)(3) advocacy group of veterans and active-duty U.S. military personnel who have served since September 11, 2001 and are working to build a movement against war culture and profiteers. IVAW currently has over 2,200 members in 50 states, as well as in Canada, Europe, and Afghanistan.

The Fort Hood Testimony Report  from is available at the following website with searchable sections: forthoodtestimonies.com.  For the Executive Summary, see underthehoodcafe.org/2014/05/announcing-the-fort-hood-report/ . n

Editor’s note: the bulk of this article is reproduced from a press release from the report’s authors.