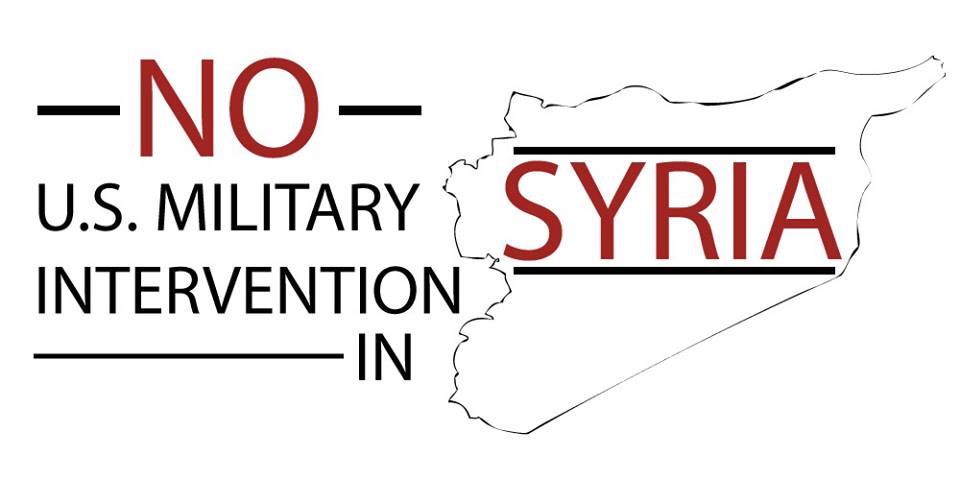 On September 5, the national office of the National Lawyers Guild distributed the following news release, written with input from members of MLTF:

NEW YORK – The National Lawyers Guild (NLG) calls on Congress to vote against the illegal strike on Syria being planned by the administration. NLG president Azadeh Shahshahani said, “The military intervention in Syria is undeniably illegal, and any supposed framework the Obama administration constructs to defend it is based, not upon legality, but upon impunity.” The United States is once again poised to violate international and domestic law to impose its will.

President Obama’s threats to take military action against Syria are predicated on hypocrisy and obfuscation, as Secretary of State John Kerry and Secretary of Defense Chuck Hagel have vocalized, respectively. While Kerry said that the United States must “assure that there is accountability for the use of chemical weapons,” the U.S. has historically used chemical weapons against other nations – Agent Orange in Vietnam, white phosphorous in Iraq, and depleted uranium, napalm, and other toxic chemicals and metals (including TNT and mercury) in Vieques, Puerto Rico.

Hagel carefully avoided the assertion that military intervention would be legal, and instead vaguely promised that “any action taken [would be] within the framework of legal justification.” According to the 1993 Chemical Weapons Convention, the U.S. and other NATO countries are only legally entitled to intervene militarily when their own states have been attacked or threatened with chemical weapons.

The use of chemical weapons in Syria cannot be ignored. But military force, especially by the U.S., has never been a viable or effective response to international human rights abuses. Furthermore, the mandates of the UN Charter prohibit the use of military force without Security Council authorization except when a country is attacked and must defend itself pending Security Council action. While the Obama administration is lobbying Congress to support a “limited” strike on Syria, the National Lawyers Guild strongly opposes any U.S. threats of military intervention – irrespective of congressional approval. Instead, the NLG calls for renewed diplomatic initiatives with Iran, Saudi Arabia, Qatar, Turkey and Russia.

In addition, MLTF along with the NLG’s International Committee, published a short briefing paper on Syria. A longer version will be available in the near future. Read: Short Briefing Paper on Syria  (PDF)