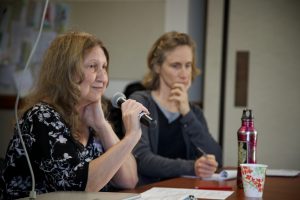 The 2013 GI Rights Network conference, held in Santa Cruz, CA, from March 7 through 10, once again was an opportunity to witness the strong bonds between MLTF and the network of (mostly) lay volunteers that staff the GI Rights Hotline with self-directed groups across the US.

It’s always a time not just for sharing skills and knowledge, but checking in with friends and colleagues working in the broader movement for GI Rights.

MLTF Executive Director Kathy Gilberd is as invaluable to GIRN volunteers as she is to those of us in the Task Force, and the warm, grateful reception she gets from conference attendees each year is witness to this reality.

In addition to working on some element of conference planning each year, she leads or co-leads numerous workshops and sits on several panels on multiple issues. Plus, she runs the MLTF literature table, which also offers, for a modest donation, the jewelry and knitted scarves she has created throughout the year. While other MLTF members attend GIRN conferences, provide their expertise on panels, and often lead workshops, to hotline workers, Kathy is the face and voice of MLTF and they always express a great deal of regard and gratitude for her, and thus MLTF’s, contributions.

According to Kathy, this year “attendees included a mix of current counselors and new ones — mostly IVAW members who attended a pre-conference basic training seminar (and most of whom will work with the Coffee Strong/GIRN group or with Bay Area GIRN). We had good attendance from MLTF attorneys and counselors, including attorneys from the Bay Area and our co-chairs from San Jose, and a couple of lawyers from the East Coast.”

On January 16, 2013, the GI Rights Network Board of Directors voted to make MLTF a full, voting member of the Network. One of GIRN’s founding groups, the Task Force had been an associate (non-voting) member since the organization incorporated and established by-laws in 2009. Rena Guay will represent MLTF on the Network’s formal Council of member groups.

“While the conference had its usual wide range of training workshops, special attention was focused on involuntary discharges, medical problems, and sexual assault, issues which attendees considered particularly timely. Task Force members, sometimes along with GIRN counselors, led seven CLE workshops on Saturday — on reserve issues, AWOL policy, handling CO cases, sexual assault complaints and reprisals, non-judicial punishment and discharge upgrading. These were well received, but not successful in drawing attorneys outside MLTF and the Network. We also had presentations on the coffeehouses, the Manning case, the Civilian Medical Resources Network, and a talk and book signing by Howard Waitzkin (who founded CMRN). ”

A MLTF membership meeting was held over lunch on Saturday, with about 10 in attendance. Discussion topics included Operation Recovery and the appeal for redress, with Becca von Behren agreeing to work with IVAW to develop more ideas on how MLTF can assist the campaign. The need for all members to help with fundraising was also mentioned, with some ideas for identifying foundations and other funding sources in their local area.

The “Council” is an oversight body consisting of one representative from each of the roughly two dozen local groups that are full members of the network. While outlined in the GIRN bylaws, the Council’s structure had not been fully developed until this year; it really was only functioning at the annual conference to elect the board.

During this year’s conference the Council was organized for a more sustained existence, with member representatives selected and a quarterly meeting schedule set for the next year. Now it will be able to perform another key mission: monitoring the operations of hotline nodes in a general way to pinpoint any issues as they arise.

As a recently approved full member of GIRN, the Task Force now is responsible for appointing its own representative to the Council. During the Santa Cruz conference, Rena Guay volunteered to participate in the Council meetings; at a subsequent Steering Committee meeting, she was approved as the MLTF representative.

Once the basic organizing tasks were taken care of, the Council got down to business and elected six board members: Kit Anderton, Dawn Blanken, Barbara Goldberg, Maria Santelli, Steve Woolford, and Chuck Vandagriff.

A staff report from MLTF Executive Director Kathy Gilberd was used in writing this article.

Rena Guay is a member of the MLTF Steering Committee.