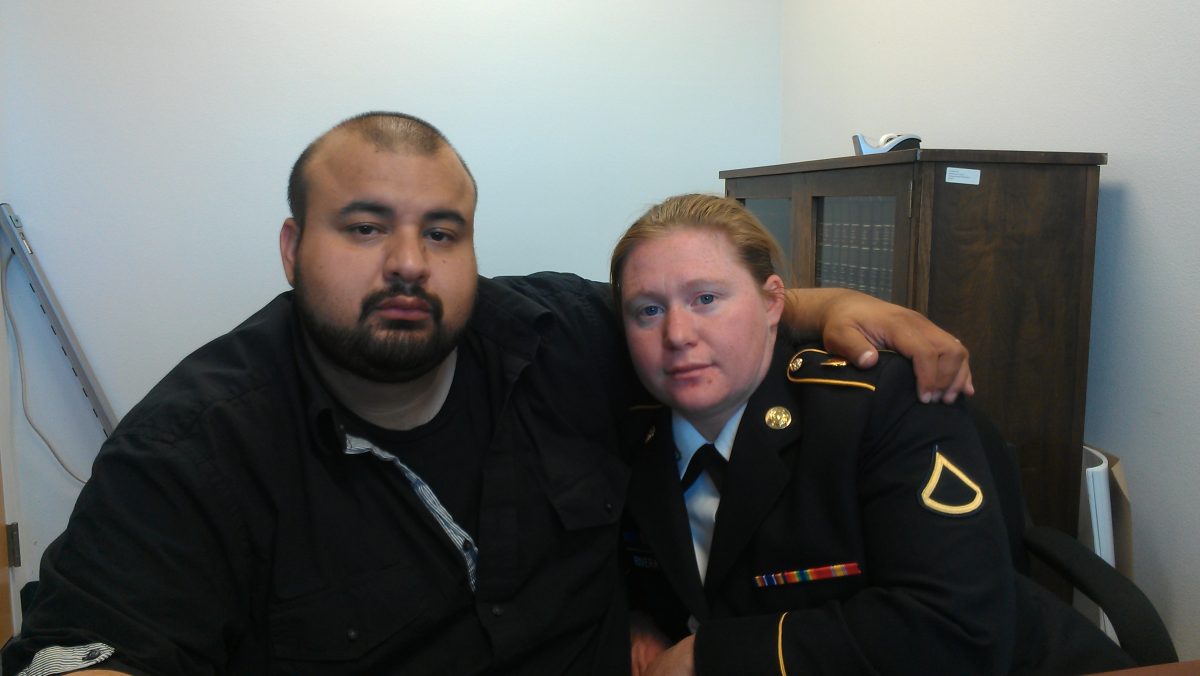 TORONTO—On Monday afternoon, during a court-martial hearing at Fort Carson, Colorado, Kimberly Rivera was sentenced to 14 months in military prison and a dishonourable discharge after publicly expressing her conscientious objection to the Iraq War while in Canada.

Under the terms of a pre-trial agreement, she will serve 10 months of that sentence.

Private First Class Kimberly Rivera deployed to Iraq in 2006 and sought asylum in Canada in 2007 because she decided she could no longer be complicit in the war. A mother of four young children—including two who were born in Canada—she was forced back to the United States of America by the Conservative government after receiving a negative decision on her pre-removal risk assessment (PRRA). A Federal Court judge denied her request for a stay of removal, finding the possibility of her arrest and detention in the U.S. to be “speculative.” Rivera was arrested three days later, on September 20, 2012, as she presented herself at the U.S. border.

“Kim is being punished for her beliefs and for her comments to the press while she was in Canada,” said James M. Branum, the defense attorney who represented Rivera during the court-martial proceedings. “Because she spoke out against the Iraq War, Kim’s sentence is harsher than the punishment given to 94 percent of deserters who are not punished but administratively discharged. In the closing arguments, the prosecutor argued that the judge needed to give PFC Rivera a harsh sentence to send a message to the other war resisters in Canada and their supporters.”

The tremendous public outcry related to Rivera’s case shows the deep and broad support that Canadians continue to express for Iraq War resisters. In a period of 10 days leading up to the Rivera family deportation, 20,000 people signed a Change.org petition (http://www.change.org/en-CA/petitions/minister-kenney-stop-the-deportation-of-iraq-war-resister-kimberly-rivera) supporting the family. Faith (http://www.united-church.ca/communications/news/general/120911b), labour (http://www.usw.ca/media/statements/opinions?id=0032) and human rights organizations spoke out, Amnesty International (http://www.amnesty.ca/news/news-item/amnesty-international-expresses-dismay-in-the-case-of-conscientious-objector-kimberly) adopted Kim as a prisoner of conscience, and Archbishop Desmond Tutu published an opinion piece in The Globe and Mail newspaper (http://www.theglobeandmail.com/commentary/dont-deport-war-resister-kimberly-rivera/article4544856/) calling the deportation order “unjust.”

In stark contrast to this outpouring of support, Conservative MPs cheered when the Rivera family’s removal was announced in the House of Commons.

“The Conservative government knew that Kim would be jailed and separated from her children when they forced her back to the U.S., yet they cheered her deportation,” said Michelle Robidoux, a spokesperson for the War Resisters Support Campaign. “They are out of step with the great majority of Canadians who opposed the Iraq War and who support allowing U.S. war resisters to stay in Canada.”

On February 1, 2013, the Federal Court of Canada issued a decision in the case of another U.S. war resister, Jules Tindungan, finding that the U.S. court-martial system “fails to comply with basic fairness requirements found in Canadian and International Law.” The Court also found that the Refugee Board failed to deal properly with evidence that soldiers who have spoken out publicly about their objections to U.S. military actions are subjected to particularly harsh punishments because of having voiced their political opinions. (http://www.marketwire.com/press-release/federal-court-rules-in-favour-of-us-war-resister-jules-tindungan-1752888.htm)

“The sentence Kim received today underlines the concerns we have been raising all along, and what the Federal Court now acknowledges, that soldiers who speak out against unjust wars face harsher punishment and have no recourse within the U.S. military justice system,” said Robidoux.

“Prime Minister Stephen Harper and Minister of Citizenship and Immigration Jason Kenney were ardent supporters of the Iraq War, and they want U.S. Iraq War resisters punished. But Parliament has voted twice to stop these deportations, and the majority of Canadians believe Kim and the other resisters did the right thing. We will continue to fight to make sure this injustice does not happen to any other U.S. war resister who is seeking asylum in Canada.”