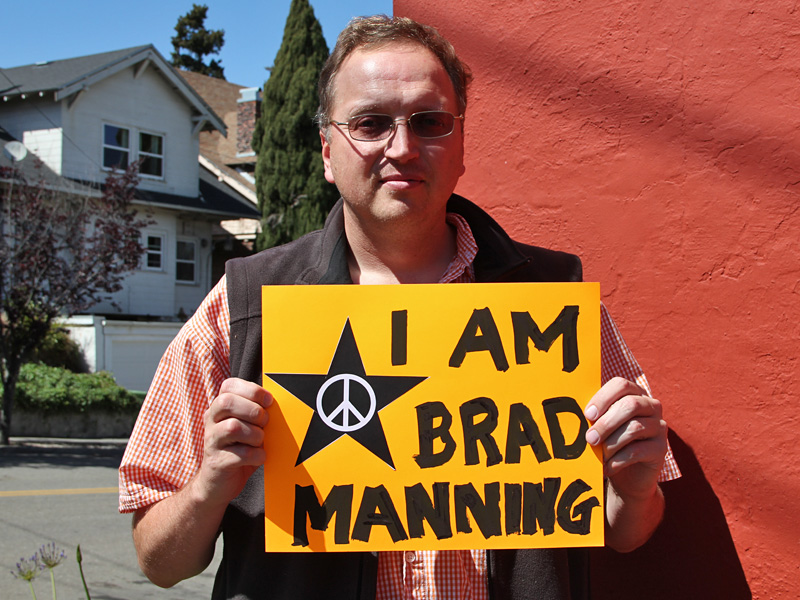 This email exchange with Jeff Paterson was conducted by MLTF’s Rena Guay on Sept. 4. Paterson is the Project Director of Courage to Resist and founder of the Pvt. Manning Support Network (formerly the Bradley Manning Support Network). This is the full “interview;” the On Watch article in which some of Paterson’s comments were used was published on Sept. 16 in the September 2013 issue of On Watch.

Question: Beyond the very critical funding of the civilian defense team, how do you think the Support Network impacted public awareness/understanding of and support for the case?

Our biggest challenge was overcoming the mainstream media’s herculean efforts to avoid reporting on what this case was actually about — a soldier who shared classified documents with the world in order to expose wrongdoing, with the greater goal of ending war. Instead of accurately reporting on Manning as a young person who took bold action guided by conscience, without personal gain of any kind, Manning was painted as a crazed, gay, misfit soldier.

Question: What was its greatest accomplishment? Biggest challenge?

We built a grassroots support network that introduced Manning to the world, with very little help from the media. The government’s narrative from the very beginning was that Manning should be executed, but life in prison would be acceptable. According to the government, Manning was a traitor and a spy, WikiLeaks was not a journalistic entity, and people were killed because of the leaks. Each of these allegations was disproven in the course of the court-martial, which led to our success in winning an acquittal on the “Aiding the Enemy” charge.

We were always going to be the underdog in this fight, going up against the unlimited resources of the government, including the State Department, FBI, and NSA. I’m proud of the team we fielded both inside and outside the courtroom.

Question: How do you think the Manning case and the Support Network changed awareness about military/government whistleblowers and GI rights to resistance and dissent, including reporting war crimes and violations of the Geneva conventions?

It’s important that folks learned that Manning was a whistle-blower in every sense of the term. Also, if Manning had only released the Collateral Murder video, a Nuremberg defense might have been successful.

Question: Finally, can you give me some updated figures about how much was raised, from how many donors. What was your count on attenders overall to observe the trial in support of Manning?

Over 23,246 individuals have donated a total of $1,440,840 to the defense fund, while an additional 825 supporters (including WikiLeaks) have given $64,164 to Pvt. Manning’s legal trust account (as of September 1, 2013). Most recent monthly fiscal report: http://couragetoresist.org/images/stories/manning/manning-fiscal.jpg

Question: Feel free to offer anything else that you think our readers should be aware of, or any future needs you anticipate.

I’ve approached every significant military resister case with the same general approach. I see the outcome of every case at the intersection of three overlapping spheres. First, the work of the legal team. Second, key decision makers in the Chain of Command, including the Convening Authority and his staff, and sometimes those upstream. Third, public opinion in general.

In my opinion, military justice usually has little to do with justice, and everything to do with discipline. Yet, we’ve “won” previous cases when the military pragmatically chooses to resolve objector cases — we  need to tip the scales in that direction with protest, favorable media, and first-rate legal support. However, in US v. Manning, the military was intent on not resolving this case short of “Espionage Act” related convictions, regardless of the costs. This trial was primarily about sending a clear message to any future military whistle-blower: Proceed only with unlimited courage, under the very real threat of unimaginable punishment. And military judge Col. Denise Lind was willing to go along with the government agenda, specifically when she upheld the “Aiding the Enemy” charge multiple times against compelling defense motions.

While Judge Lind and the government extracted a 35 year sentence from Manning, they did so with little concern for how things might look upon appeal — and that offers significant hope down the road. Lind allowed the prosecution to make significant changes to the charge sheet after the close of all arguments in order to match the evidence presented, after the fact. Lind bent over backward to void the 120 day speedy trial clock. And while Lind ruled that Manning was illegally subjected to pre-trial punishment, she only credited 112 days for 9 months of torturous treatment. Given that Manning’s sentence is nearly 13,000 days, those 112 days is insignificant. If that credit and/or sentence is allowed to stand, it tells the military that they have the green light to illegally abuse a service member in pre-trial confinement, as long as a long sentence is expected down the road.

Finally, I would underscore that our campaign going forward, under our new “Private Manning Support Network” name, will continue to support Pvt. Manning in all appeals, including a bid for a Presidential Pardon filed today, the clemency appeal to the Convening Authority Maj. Gen. Jeffrey Buchanan in the fall, and case before the Army Court of [Criminal] Appeals next year. Manning will also have a clemency hearing in three years at Fort Leavenworth, and her first parole hearing in a little over seven years.

While the support network’s efforts will remain focused on why Manning is now a political prisoner, and how to free her without delay, we will also be expanding our work to encompass Manning’s health care needs at Fort Leavenworth — specifically that she be given access to hormone therapy appropriate for a trans woman. There is favorable case law in the courts covering federal prisons, so this will be an interesting fight to force the military to do the right thing and provide that medically accepted therapy to a trans soldier.

I would suggest quoting from Manning’s statement in support of the Presidential Pardon petition:

The decisions that I made in 2010 were made out of a concern for my country and the world that we live in. Since the tragic events of 9/11, our country has been at war. We’ve been at war with an enemy that chooses not to meet us on any traditional battlefield, and due to this fact we’ve had to alter our methods of combating the risks posed to us and our way of life.

I initially agreed with these methods and chose to volunteer to help defend my country. It was not until I was in Iraq and reading secret military reports on a daily basis that I started to question the morality of what we were doing. It was at this time I realized that (in) our efforts to meet the risk posed to us by the enemy, we have forgotten our humanity. We consciously elected to devalue human life both in Iraq and Afghanistan. When we engaged those that we perceived were the enemy, we sometimes killed innocent civilians. Whenever we killed innocent civilians, instead of accepting responsibility for our conduct, we elected to hide behind the veil of national security and classified information in order to avoid any public accountability.

In our zeal to kill the enemy, we internally debated the definition of torture. We held individuals at Guantanamo for years without due process. We inexplicably turned a blind eye to torture and executions by the Iraqi government. And we stomached countless other acts in the name of our war on terror.

Patriotism is often the cry extolled when morally questionable acts are advocated by those in power. When these cries of patriotism drown out any logically based dissension, it is usually the American soldier that is given the order to carry out some ill-conceived mission.

Our nation has had similar dark moments for the virtues of democracy — the Trail of Tears, the Dred Scott decision, McCarthyism, and the Japanese-American internment camps — to mention a few. I am confident that many of the actions since 9/11 will one day be viewed in a similar light.

As the late Howard Zinn once said, “There is not a flag large enough to cover the shame of killing innocent people.”

I understand that my actions violated the law; I regret if my actions hurt anyone or harmed the United States. It was never my intent to hurt anyone. I only wanted to help people. When I chose to disclose classified information, I did so out of a love for my country and a sense of duty to others.

If you deny my request for a pardon, I will serve my time knowing that sometimes you have to pay a heavy price to live in a free society. I will gladly pay that price if it means we could have a country that is truly conceived in liberty and dedicated to the proposition that all women and men are created equal.