By James M. Branum
Chair of the Military Law Task Force of the National Lawyers Guild

Growing up in small-town Oklahoma, one of my greatest influences was the Boy Scouts. I learned some of my first lessons in civics through the Boy Scout Handbook. The Handbook told me that the United States was a different kind of nation, a nation composed of people with roots from around the world, but united by certain shared ideals — democracy and due process of law. I took that message to heart because I thought it was proven by the history I learned in school.

Later, I learned that the Handbook and History class didn’t tell the whole story. America’s history wasn’t always so noble. We as a nation have not always been on the side of “liberty and justice,” and sometimes our noble words have really been “bounced checks on the Bank of Justice” (to paraphrase Dr. King’s famous “I Have a Dream” speech). But I believe that our collective failure to always live up to those ideals does not negate their value to the soul of our Union, always striving to be “more perfect.”

These ideas have been pressing on my mind lately as I think of the case of accused Wikileaks whistleblower PFC Bradley Manning.

After almost two years of delay, PFC Manning will likely be tried this summer before a US Army court-martial. While the world watches how this case unfolds, I think it will become clear that our nation is on trial too. There are two charges pending : (1) through its gross overreaction to real security threats, the US has forsaken any semblance of democracy, and (2) The US government does not respect due process of law.

If we are a democracy, which requires informed citizens, why has critical information about the wars in the Middle East been kept from us? It should not have been necessary for a private first class in the Army to allegedly leak this information in the first place. If anything, we as a nation should be thanking PFC Manning for performing this important national service.

And are we really a nation that protects due process of law, when PFC Manning’s treatment has included:

It is not too late for the US to undo this injustice, by dismissing all charges against Bradley Manning.

I urge all people of conscience to join the campaign to free Bradley Manning. 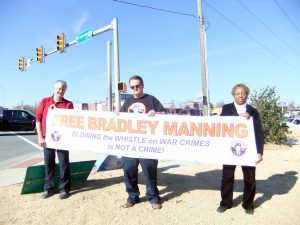