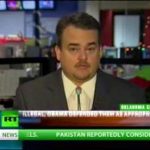 The Russia Today network hosted a debate on US Army whistleblower Bradley Manning. They invited MLTF Chair James M. Branum, of Oklahoma City, to join the panel to argue on behalf of Private Manning.

Other participants included Bob Meola in Berkeley, CA (commissioner of the Berkeley Peace & Justice Commission) and Seton Motley in Washington, DC (of the Less Government Foundation). The moderator was Peter Lavelle in the RT.com studios in Moscow. Each joined the conversation from studios in their home cities.