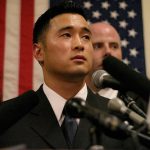 A federal judge in Tacoma has delayed the court-martial of 1st Lt.
Ehren Watada, a Fort Lewis Army officer to refuse to deploy to Iraq.

In a rare intervention of a civilian court in the military justice
system, U.S. District Court Judge Benjamin H. Settle granted the
emergency stay shortly before close of business Friday.

Watada’s trial, slated to begin at 9 a.m. Tuesday, is now postponed
until at least Oct. 26, the judge ruled.

In granting the stay at 4:48 p.m., Settle determined that he has
jurisdiction under federal law to grant the stay and that Watada’s
claim that a second-trial amounts to double jeopardy is not frivolous
and “has merit” for consideration.

“The irreparable harm suffered by being put to a trial a second time
in violation of the double jeopardy clause of the Fifth Amendment
stems not just from being subjected to double punishment but also from
undergoing a second trial proceeding,” Settle wrote in quoting case
law.

Watada’s lawyers, Jim Lobsenz and Ken Kagan of the Seattle firm Carney
Badley Spellman, have argued that the circumstances of a mistrial
declared in Watada’s court-martial in February result in double
jeopardy — being tried twice for the same charge.

The mistrial was declared over Watada’s objections and after a panel
of military officers acting as a jury had heard evidence but not begun
deliberatons.

Watada’s appeals have been dismissed by the military trial judge and
the U.S. Army Court of Appeals. An appeal was made Sept. 18 to the
Court of Appeals for the Armed Forces, the highest court in the
military justice system.

Lobsenz and Kagen said they were compelled to ask the federal court on
Wednesday to stop the court-martial. Watada’s trial approached, and
nothing had been heard from the armed forces appeals court. With
Monday a federal holiday to observe Columbus Day, time was even
shorter, they said.

Settle indicated at a hearing on Thursday that he might defer to the
military appeals court if it made a decision by Friday, but at close
of business Friday, it hadn’t ruled.

Because the case being heard in federal court, the U.S. Attorney’s
Office now is arguing the government position.

Watada publicly refused to go to Iraq with the 3rd Stryker Brigade in
June 2006, contending that the war there is illegal and exposed
members of the military to war crimes. He has been charged with
missing movement and conduct unbecoming an officer. He could be
sentenced to up to six years in prison if convicted.

Settle has set up a briefing schedule to examine the merits of the
double jeopardy argument and how long he will continue the stay. The
government has until Oct. 12 to file its arguments, and Watada’s
lawyers must reply by Oct. 17.

The twists and turns of the court-martial proceedings against Fort
Lewis 1st Lt. Ehren Watada continue to cause pain and division.

Watada came to an easily debated but apparently sincere decision that
the Iraq war was wrong, even illegal. He had one mistrial, and his
attorneys are trying to block a second proceeding as violating rules
against double jeopardy. But the court-martial is scheduled to begin
Tuesday.

However the defense appeals turn out, we think there is a case for
letting Watada leave the Army without further ado. That could be taken
as a statement of higher-level confidence, a choice to focus on the
larger military mission that President Bush and Gen. David Petraeus
insist is making new progress. At a minimum, many of those who oppose
the Iraq war would welcome the leniency for someone they view as a
person of conscience.

Amnesty International today expressed serious concern that US Army First Lieutenant Ehren Watada could face up to six year’s imprisonment solely for his conscientious objection to participating in the Iraq war. Ehren Watada is due to face US court-martial on 9 October for refusing to deploy to Iraq.

“It is unacceptable that Ehren Watada should face punishment for peacefully expressing his objections to the war in Iraq. His internationally recognized right to conscientious objection must be respected,” said Susan Lee, Amnesty International’s Americas Programme Director today.

Ehren Watada refused to deploy to Iraq in June 2006, based on his belief that the Iraq war is illegal and immoral. Amnesty International believes that his objection to the war is genuine and that, if found guilty, he would be a prisoner of conscience who should be immediately and unconditionally released.

The right to refuse to perform military service for reasons of conscience, thought or religion is protected under international human rights standards, including the Universal Declaration of Human Rights and the International Covenant on Civil and Political Rights (ICCPR), which the US has ratified.

Ehren Watada is charged with missing his unit’s deployment in June 2006 and with “conduct unbecoming an officer” for making public comments criticizing President George Bush and the Iraq war. In addition to a possible six-year prison term, he also faces a dishonourable discharge from the Army. His first court-martial in February 2007 was declared a mis-trial after questions arose as to whether Ehren Watada had understood a pre-trial agreement he had signed.

Ehren Watada joined the army in 2003 for a three-year term, which was due to end in December 2006. In January 2006, he submitted a letter to his army command outlining his reasons for refusing to participate in the Iraq war and asking to resign from the army. He did not formally apply for conscientious objector status because US army regulations stipulate that applicants for this status must be opposed to war in any form; they do not provide for conscientious objector status on the basis of an objection to a specific war.

Amnesty International considers a conscientious objector to be any person who, for reasons of conscience or profound conviction, refuses to participate in war or armed conflict. This can include refusal to participate in a war because one disagrees with its aims or the manner in which it was being waged, even if one does not oppose taking part in all wars.

In a speech given in August 2006, Ehren Watada defended his position, “One who breaks an unjust law that conscience tells him is unjust, and who willingly accepts the penalty of imprisonment in order to arouse the conscience of the community over its injustice, is in reality expressing the highest respect for law.”